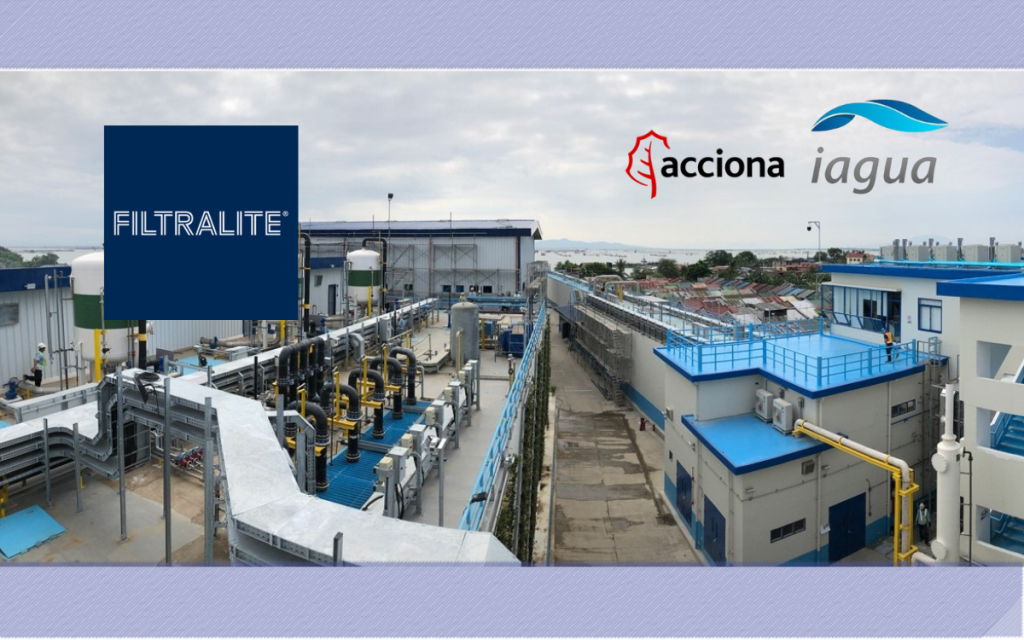 Filtralite®, the filter media used in BIOBOX® Ammonium technology, presents the success story of the biofiltration carried out for the Putatán II DWTP built by ACCIONA.

In this project, the new Putatan II drinking water plant, located in the metropolitan area of Manila (Philippines), has a capacity of 150,000 m3/d and supplies a population of one million people.

Maynilad Water Services Inc. (MWSI) is the full-cycle service provider for the western Greater Manila area. In 2016, it awarded the final design and construction of Putatan to the consortium formed by ACCIONA and local companies Jardine Energy Control Philippines (JECP) and Frey-Fil Corporation.

One of the main challenges in the design of this DWTP was the advanced treatment of the raw water from the Laguna de la Bahía, which suffers from the effects of high demographic pressure. The water from this lagoon is slightly brackish, with conductivities of over 1,000 µS/cm. The main problem for its potabilisation is a high ammoniacal nitrogen content, with peaks of 7 mg/l and high levels of organic matter. The complexity of the treatment design of the DWTP was compounded by the limited space for its construction and the requirement to produce drinking water with a very low carbon footprint.

After commissioning the DWTP, the performance obtained with Filtralite® is optimal in terms of pollutant removal.

At the heart of the plant’s treatment line was the inclusion of aerated biofilters (BAFs).. BAFs deal with the removal of ammonia nitrogen and biodegradable organic matter, and also achieve the removal of suspended solids. The initial MWSI project was based on biofiltration, based on the experience of the Putatan I DWTP, which has been operating with this technology for many years. The results of the BAF of the old plant have demonstrated the high efficiency of the solution and low operating costs. These factors made biofiltration in the expansion of the existing plant a design priority for MWSI.

The concept of biological nitrification is widely known in wastewater. However, in drinking water treatment it improves on the classical approach of ammonia nitrogen removal by chlorination up to the break point. The main problem with the break point approach is that the ammonium versus chlorine demand is in the order of approximately 1 to 10. Putatan II, with 120,000 m3/day and minimum values of 1.3 mg/l N-NH4, would require minimum reagent quantities of about 15 ton/day. For peak values of 7 mg/l N-NH4, recorded seasonally in the raw water of Putatan II, the chlorine requirement skyrockets.

From an economic point of view of the solution, biofiltration versus chlorination, the increase in OPEX of the reagent itself more than justifies the investment in biofiltration. Especially considering the low process cost of the biofiltered m3. As far as chlorination is concerned, the high OPEX is compounded by the complexity of the reagent management that would be necessary for ammonium removal at the Putatan II plant: purchase, transport, handling and storage. Furthermore, such a massive chlorination of such raw water – with a high organic matter content – would lead to the formation of undesirable disinfection by-products.

ACCIONA focused on the design of the biofiltration supported by its own technology, using the aerated biofilter Biofilpas®. This biofilter is filled with expanded clay with the technical specifications of Filtralite® HR 3-6. Filtralite® is the optimal filter medium for the biofiltration process due to its high specific surface area, its high resistance and its excellent hydraulic performance. Due to the conditions of the material (pH and high porosity), the biofilm formed is very specific and efficient, the formation process is very fast, the fixation is highly effective and there is no loss of performance after washing.

Putatan II plant was designed with 14 aerated downflow biofilters, 12 + 2, as required by the specifications. The objective was to achieve a hydraulic load of 10.5 m/h, ensuring maximum loads of 12 m/h with a backwashing filter. Biofiltration operates at significantly higher velocities than typical sand filtration. The space optimisation generated solves the existing space problems.

Putatan II is the second DWTP to install Filtralite® in Asia to address ammonia nitrogen.

In terms of process efficiency, BAFs with Filtralite® face water inputs to the biofiltration with pollutant loads of: 6-10 ppm/l BOD, 1.3 -7 ppm/l N-NH4 and average TSS values of 100 ppm/l. The requirements for the biofiltration output are as follows: < 2 ppm/l BOD; < 0.1 ppm/l N-NH4 for inputs below 2 ppm or removal up to 90% for inputs above 2 ppm; and TSS below 5 ppm.

Biofiltration with Filtralite® in drinking water demonstrates high operational performance and low OPEX compared to other solutions. The transition from a chemical to a biological approach to solve this type of problem in DWTPs is a reality. This is the second DWTP to install Filtralite® in Asia to address ammonia nitrogen. The first plant was in Tai-Po (Hong Kong), and everything points to this technology becoming an increasingly important alternative in drinking water treatment.

*Thanks to ACCIONA for their collaboration in the writing of this article.

What is climate change?