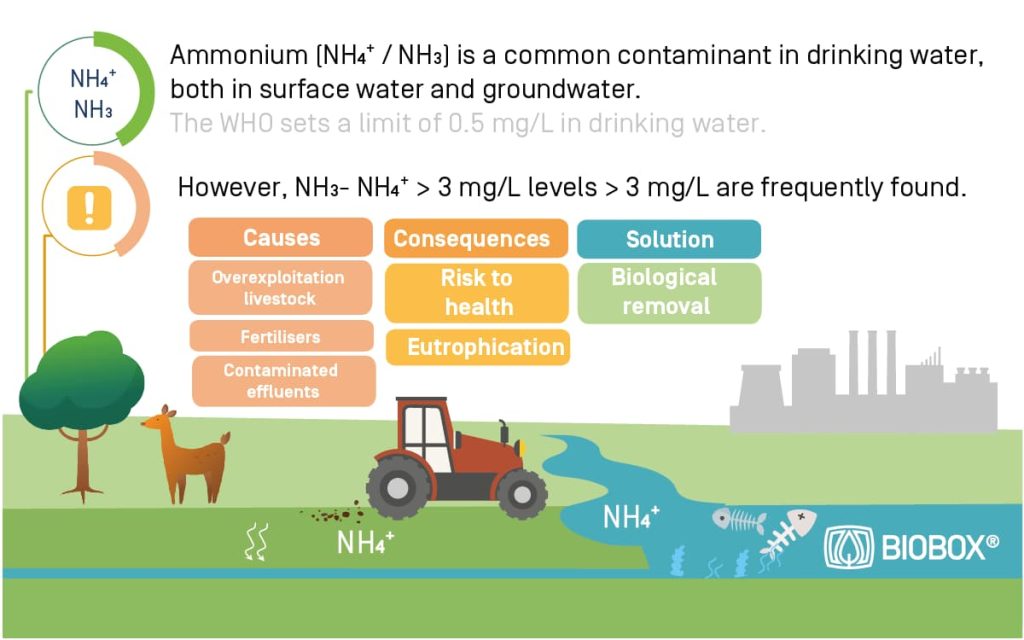 How to remove ammonium from drinking water?

Ammoniacal nitrogen (NH4+ / NH3) is a common contaminant in drinking water, both surface and groundwater. The World Health Organisation sets a limit of 0.5 mg/l in drinking water. However, NH4+ / NH3 levels above 3 mg/L are frequently found.

The source of pollution mainly comes from the abusive use of fertilisers, overexploitation of livestock, urban wastewater or polluted effluents from industrial processes.

In high concentrations, ammonia is harmful to humans as it can cause damage to the mucous membrane covering the lungs. It can also cause alkaline burns.

For the environment, the presence of this type of pollutant seriously affects the stability of ecosystems.  The biggest problem is undoubtedly the contamination of drinking water bodies.

Ammoniacal nitrogen belongs to the nutrient group of nitrogenous species. Therefore, the high concentration of these pollutants discharged into water bodies exceeds the natural self-purification capacity of ecosystems and contributes to the massive growth of organic matter.

The presence of a large quantity of this nutrient causes a phenomenon called eutrophication. This phenomenon consists of an accelerated and uncontrolled growth of algae, which rapidly cover the surface of the water. The increase in biomass causes a deterioration in water quality. It also causes turbidity that impedes light from penetrating to the bottom of the ecosystem. As a consequence, vegetation dies and a large amount of sedimentable solids and dead plant debris is generated.

This causes the oxygen in the available water mass to be depleted (anoxia), resulting in a major natural disaster that leads to the death of thousands of species and aquatic organisms.

In conclusion, regulating their concentration in the discharge is vital to preserve the environment.

The most commonly used methods to remove ammonium from drinking water are as follows:

Do you need more information?

Take a look at some BIOBOX® Ammonium success stories

We’re here to help you!

We will be happy to hear your case, answer questions and provide a free quote.

Work begins on the new BIOBOX® Nitrate denitrification plant for the Calicanto water supply in Torrent.

How to remove Iron and Manganese from drinking water?

BIOBOX arrives in Chile with the support of Simtech